What Are USB Connectors? 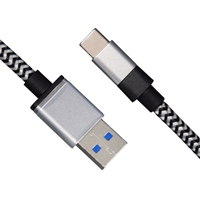 What Are USB Connectors? Universal Serial Bus (USB) was developed in the 1990s in an effort to simplify the connections between computers and peripheral devices....

Universal Serial Bus (USB) was developed in the 1990s in an effort to simplify the connections between computers and peripheral devices. It has become widely popular due to its compatibility with many platforms and operating systems, its low cost of implementation, and its ease of use. Most computers that are built today come with several USB ports, and USB is the interface of choice for most home and office peripherals including printers, cameras, modems, and portable storage devices.

USB standards are developed and maintained by an industry body called the USB Implementers Forum (USB-IF). In its original specification, USB defined only two connector types: A and B. Revisions to the specification and demands on manufacturers have expanded the breadth of connectors used for USB devices, but the majority of USB products still use these A and B connector interfaces.